From the Ratcliffe Highway murders to Wainewright the Poisoner, how crime became entertainment.

Whether in their original ankle boots or stylishly rebooted, the fictional Sherlock Holmes and the real Jack the Ripper continue to swirl in our imaginations. The Victorian era, for all its proverbial propriety, was the era when violence—and murder—became staples of popular culture.

In 1849, for instance, the public was diverted by the woman the London Times likened to Lady Macbeth. Maria Manning, once a lady’s maid to a duchess, was convicted along with her husband of killing her lover with a coal shovel and burying him under their kitchen floor in quicklime. Motive: his railway shares. Their capture was thrillingly up-to-date: Mrs. Manning had fled to Edinburgh on a fast train—30 miles an hour!—but the London police were able to alert their Scottish counterparts by the even swifter telegraph. As the first couple executed together since 1700, the Mannings attracted a considerable crowd to their public hanging; perhaps as many as 50,000 people began to gather outside the jail the night before, raucously singing topical words about them to a popular tune. 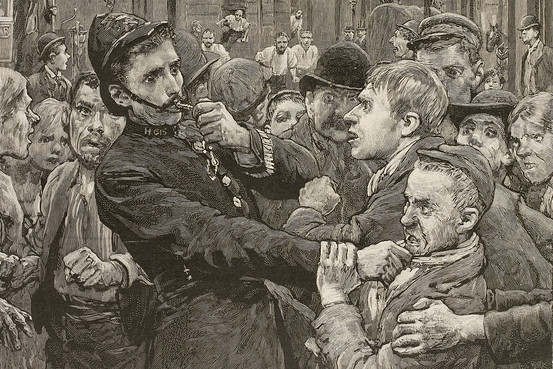 Crime Time An 1895 image from The Graphic, an oversized weekly paper whose middle-class audience paid a bit more for art by top illustrators, serials from Trollope and other novelists and a tasteful serving of stories of crime, murder and detection.

Respectable people declared themselves horrified at the spectacle, as Mrs. Manning was hanged in an elegant black satin dress. One concerned citizen wrote to the Times: “When the sun rose brightly—as it did—it gilded thousands upon thousands of upturned faces, so inexpressibly odious in their brutal mirth or callousness, that a man had cause to feel ashamed of the shape he wore, and to shrink from himself, as fashioned in the image of the Devil.” The citizen was Charles Dickens, who along with some companions had rented a roof view for a 10 guineas; on a neighboring roof was Herman Melville, who paid only a few shillings. Within a year, Dickens had turned the Swiss-born Manning into a murderous French lady’s maid dressed in black in “Bleak House.” Quicker off the mark was Madame Tussaud, who only three weeks after the execution advertised Mrs. Manning as the latest waxwork. (Mrs. Manning holds the Tussaud record, having been exhibited for 122 years.)

Judith Flanders’s wonderful, sometimes appalling “The Invention of Murder: How the Victorians Reveled in Death and Detection and Created Modern Crime,” is a guidebook to notably grisly true-life tales. There are unsolved violent crimes, such as the Ratcliffe Highway murders in 1811, in which a whole family (including a baby in his cradle) was massacred in their house. There is the occasional murder of a master by a servant—the most famous occurred in 1840, when the Swiss valet Courvoisier slit the throat of the 73-year-old Lord William Russell. There’s the larger category of love gone wrong, including the tale of Maria Marten, murdered in 1827 by a former lover and buried in a barn. There’s the even larger category of murders for profit: The zeal with which William Burke and William Hare provided bodies for Edinburgh medical students in the late 1820s leads the tongue-in-cheek Ms. Flanders to call them “pioneers of capitalism.”

Most evocative for fans of the great sleuths of the mystery novel are the middle-class murderers, quietly going about their nefarious business in country houses and suburban villas. Who savagely murdered the 3-year-old Francis Kent, last seen sleeping in a room with his nursemaid and later found “thrust down the outside privy, his throat cut”? Could it have been his half-sister Constance? And did the Glasgow Miss, Madeleine Smith, poison her secret (and lower-class) lover when her architect father found her a more suitable match in 1857? Constance Kent later confessed, although there is some doubt whether her confession is reliable, as Kate Summerscale showed in her reconstruction of the case, “The Suspicions of Mr. Whicher” (2008).

Yet murders considered in themselves are merely Ms. Flanders’s starting point for her real interest: the Victorian public’s growing taste for blood. Murder appealed to every caste, filling newspapers, stages, novels and even mantelpieces: Pricey Staffordshire china statuettes featured murderers and their victims. So what happened to make Victorian murders so attractive—and celebrated? What fed the fascination with the lurid details, the dogged detectives, the confirming forensics, the trials and public executions, the ghastly souvenirs?

One important factor, Ms. Flanders suggests, was increasing literacy—and I would add the more mundane factors of cheap paper and steam printing presses to speed production. With a good murder, Ms. Flanders says, a newspaper might be “entirely given over to police, trial and magistrates’ court reports.” Reader interest made it difficult for newspapers to resist the temptation to exaggerate and fabricate. “Truth,” Ms. Flanders notes, “became an irrelevancy.”

All too often papers giddily wielded their power to conduct a “trial by newspaper,” frequently taking sides. The Observer and the government-subsidized Morning Post touted the reliability of the legal establishment; the Times was more impartial, “happy to print any rumors that surfaced” and was particularly skilled in editorially bemoaning the grotesque manipulation of public sentiment while publishing long trial transcripts and speculative reports filled with gruesome matter. Murder and hypocrisy—or at least people’s ability to keep “their sympathy and their interest in different pockets,” as Ms. Flanders puts it—seemed to go hand in dagger.

A more surprising factor was youth. “The whole country was getting younger,” Ms. Flanders observes. By the 1820s, “almost half the population was under twenty. This was an audience worth catering to: even if, individually, they had almost no money, collectively they could create riches.” Poorer young audiences helped fill the penny gaffs, cheap theaters staging knockoff plays in the backs of pubs; richer children played with paper-toy theaters that came with prefabricated sets to stage horrid deeds. For every “respectable” publisher, there were 10 others pulping out penny dreadfuls and other forms of sensationalist storytelling.

The police were themselves an exciting innovation—having come into being in London only in 1829, partly in response to the Ratcliffe Highway murders. The police were sometimes admired—many future mystery writers had read, as children, the memoirs of Eugène François Vidocq, the French ex-convict turned detective. More often the police were distrusted: Dickens’s novel “Martin Chuzzlewit” (1843) includes a man named Chevy Slyme who enters the force solely to be “bought off.”

What it wasn’t was an age of reliable procedure and evidence. Blushes, hearsay and “character” often established guilt. Poorer and more marginal suspects, such as widowed women, were often found guilty on gossip alone; middle-class suspects tended to be believed. When Dr. William Palmer was suspected of murder, he was allowed to attend the postmortem of the man he was accused of poisoning. He “accidentally” spilled the jar containing the stomach contents. Why was he there at all? Because he appeared to be a respectable doctor.

In the Mannings’ case, there was no test to identify a stain as blood. Less than 40 years later, readers would meet Dr. John Watson as he was introduced to a potential flatmate in the middle of a thrilling experiment: ” ‘I’ve found it! I’ve found it,’ he shouted . . . , running towards us with a test-tube in his hand. ‘I have found a reagent which is precipitated by haemoglobin, and by nothing else.’ ” Arthur Conan Doyle, Sherlock Holmes’s creator, himself trained as a doctor in Edinburgh, and was accurately reflecting the impressive advances that the Victorians had made in medical and forensic knowledge, with the results published in such magazines as the Lancet, founded in 1823. Even so, it took a while for such knowledge to affect what went on in the courtroom or in the court of public opinion.

Two men in “The Invention of Murder” rise above the mobs, doctors, lawyers and judges who tended to see guilt where it was least uncomfortable to do so: an “ordinary jobbing author” named John Watkins and the solicitor Jonathan Hayward. In 1815, Eliza Fenning, a 21-year-old cook, was accused of poisoning some dumplings (which ultimately killed no one). Everyone who mattered assumed that she was guilty except Watkins, who “acted more like a detective than the police would as late as the 1840s,” Ms. Flanders writes. He evaluated factual evidence against shifting testimony and even calculated whether in fact a fatal amount of arsenic—or indeed any arsenic at all—had been present in the dumplings. He publicly pressed the case for her innocence. In 1887, Hayward, “almost unprofessionally, and touchingly . . . distraught” at the railroading of his Jewish client Israel Lipski, “published a pamphlet outlining the defence more cogently than Lipski’s barrister had done in court.” Poetic justice decrees otherwise, but both Eliza Fenning and Israel Lipski hanged.

Fenning’s sad tale, like many of the other murder cases recounted here, was quickly adapted into fabulously melodramatic fiction. This is the final piece of Ms. Flanders’s puzzle: how writers—from hack journalists to highfalutin novelists—eventually used such raw material to shape the narrative expectations for the mysteries and thrillers that we read today.

Certain murders seemed to appeal particularly to the imaginations of writers. The poet Thomas Hood and the novelist Edward Bulwer-Lytton both reimagined the story of the 18th-century murderer Eugene Aram, a poor schoolmaster and self-taught linguist. Bulwer-Lytton and his friend Dickens lifted elements from the gentlemanly poisoner Thomas Griffiths Wainewright, an arts critic whose possibly apocryphal motive for murdering his sister-in-law later tickled Oscar Wilde: “Yes, it was a dreadful thing to do, but she had very thick ankles.” (The insurance money Wainewright hoped to receive was apparently beneath mention by all except the authorities, who transported him to Tasmania for fraud—not murder.) Ms. Flanders spots traces of Wainewright in novels by Robert Smith Surtees, Bulwer, and Caroline Clive; two novels each by Wilkie Collins and Mary Elizabeth Braddon; and at least three works by Dickens, plus a play starring Henry Irving in which Wainewright has mostly faded to “an aura of stylish evil.”

Writers like Dickens also began to play with the elements of the murder and, more innovatively, the ways that murder stories were told. In “Bleak House” (1852-53), the tenacious Inspector Bucket was inspired by a real police inspector whom Dickens had shadowed on his duties. More important, Ms. Flanders notes, Inspector Bucket is the means by which Dickens inaugurated the “trick ending, where all is revealed, soon a standard of detective literature.” As the century progressed, audiences became “fascinated not by the crime but by its solution, by the detection of crime.”

Ms. Flanders is far from the first person with a scholarly cast of mind to tackle this subject. Her most worthy predecessor is Richard D. Altick, whose “Victorian Studies in Scarlet” appeared more than 40 years ago. Altick’s book brilliantly raided the Notable British Trials series to gaze into the rhythms and minutiae of daily life. Ms. Flanders has no less brilliantly ventured even further into the source material. She has read many decades of newspapers and magazines and journals; she has plowed through broadsides, play scripts and trashy fiction of all kinds. She shines in her readings of literary novels containing criminal and detective elements, such as “Oliver Twist,” “Mary Barton” and “Tess of the D’Urbervilles,” but can be sharp and very funny about the vagaries of melodramatic and sensational plotting.

Holmes once chided Watson, “You see but you don’t observe.” Ms. Flanders does both. This is an enticing book for any reader who, like the genteel lady in Emily Eden’s “The Semi-Detached House” (1859), admits: “There is such a grand murder in the paper . . . a whole family poisoned . . . it is very shocking, but I like to hear about it.”

—Ms. Mullen writes for the Hudson Review and Barnes and Noble Review.

Posted on August 1, 2013, in General News. Bookmark the permalink. Leave a comment.